The next few posts will be a re-hash, getting more depth of DVD and movie collection, of the post “Searching, Collecting, and Maintaining DVDs!” 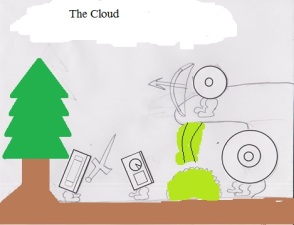 The Laserdisk had to be the black sheep of the family.  For every step forward there was a step backward having issues with compatibility between companies, being expensive, and quality was a blah (maybe, depending).

The laserdisc has a history spanning from 1967 until 2002/2009.  Improvements did happen and the technology did get better, but the cost was insane, and the cheaper and more compact DVD ended up taking over the market.   There is a whole lot of technology jargon, and I will not get into that (headachetastic).  The one important “historical” outcome is the “extra feature.”   This is a kin to the USFL introducing the “red flags” and instant replay.

Two Points about Special Features and the Laserdisc.

HD did not survive the market, but Blu-Rays did, enough said.  The DVD beat out VHS and Laserdisc, and is evolving into the Blu-Ray.  This does not matter since a customer can play a regular DVD on a Blu-Ray player.

Boooo to Digital.  Maybe, not a hearty boo such as  when fanatics take a look at the opposing team’s quarterback.  Digital has been a trend lately, and will always be around.  I am not against digital or streaming.  I have an account with Netflix, Amazon Prime (before the digital streaming trend), and Full Moon Streaming.  I have only purchased one movie in the digital format, The Nutcracker, for my son.  The concern with digital is the ownership of the product.  When a consumer purchases a physical copy that customer owns that copy.  He or she can lend out that DVD to friends and family or sell it to a third party.  With the digital format, I pay for the right to watch the movie within the particular cloud that I am using or stored in my computer.  I do not pay for the full ownership of the product.  What if Amazon goes or that music cloud website goes bankrupt?  If the item is not stored on your computer, you no longer have that product.  I will be waiting until the copyright  laws are revamped for the digital times giving the consumer some rights.

Know your devices and your formats.  I say this from experience.  Not all movies are on DVDs (Here is a Laserdisc niche website), and retailers such as Amazon sell multiple formats.  The main reason why we own The Nutcracker (1986, conceived by, Maurice Sendak) is the fact that this particular version is not sold on DVD, but digital and VHS.  Of course, we do not own a VHS player anymore.  Even though there is a part of me that does want to buy each device.